From Torben: My 'Tunnel-project' is now finished and the result was this book.
Some say that the tunnel should be mentioned as one of the worlds wonders, but after
investigating it for about 4-5 years I will use the words "exellent workmanship" instead.
If you want information about the tunnel and see my version of what happened 2500 years ago, then click on the book. 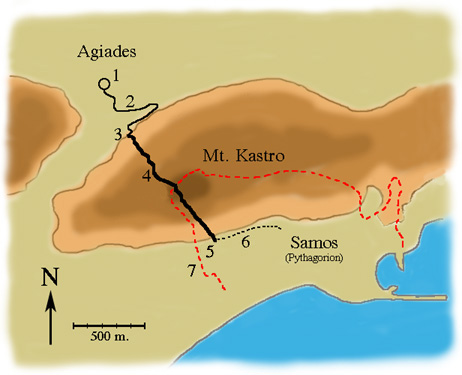 The tunnel building began year 530 BC during the tyranny of Polycrates and lasted aprox. 10 years. The engineer Eupalinos from Megara was the constructer, and some sources claim, that the work was done by prisoners/slaves from Lesbos (no historical evidence found for that, so?).

It was the first time a tunnel were made from both ends at the same time, and the two groups of workers (one from north and one from south) met with remarkable precision both horizontal and vertical !

It passes 170 m under the top of Mt. Kastro. About 7000 cubic meter of rock were removed.
The length of the duct from the spring to the north entrance (1 to 3 on map) is 830 m.
Estimated the tunnel supplied the city with 400 cubic meter of water per day. The tunnel was in use for more than 1000 years until year 700. Then the existence of the tunnel was forgotten.

Around 1853-56 the aqueduct was found again and in 1973 the entire tunnel was uncovered. 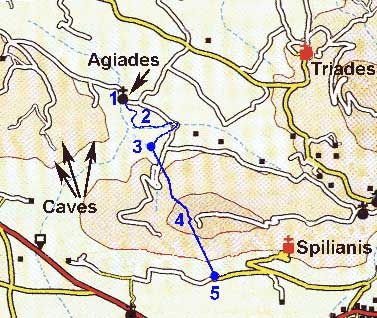 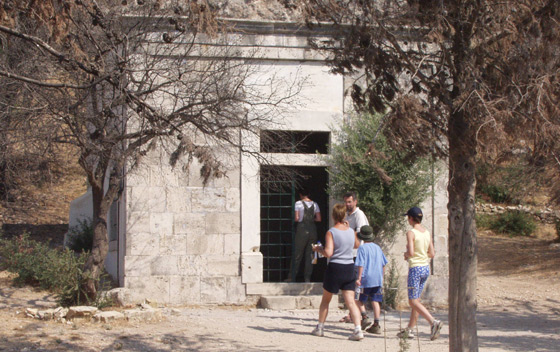 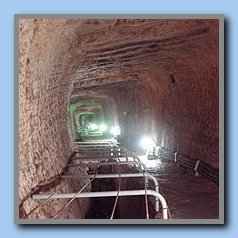 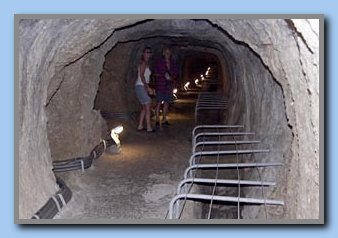 View from the public part of the tunnel. 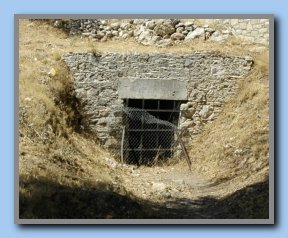 There is an opening just under the visitors entrance.

Behind the fence there is a narrow passage leading down to the water channel. 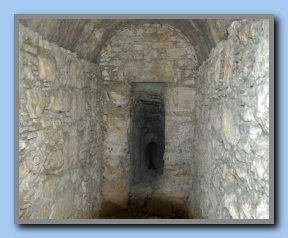 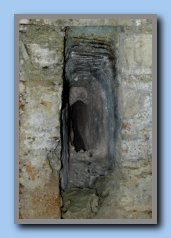 From there the water was transported in ducts and tubes to the ancient
city area, where it was kept in reservoirs/tanks.

The beginning of the tunnel.

To see where the tunnel begins, we have to go to the north side of Mt. Kastro.

From here, there is a nice view up to the ancient wall on the top of Mt. Kastro.

The summer 2006 I decided to find the north entrance.
It was not shown on any of my maps, but it was rather easy to find.

Six steps to find the north entrance: Numbers in () refer to the numbers on the picture.
1-   Drive from Mitilini against Hora.
2-   Take the first road to the left against Mon. Triades.
3-   Take the 3'rd last 'dirt road' to the right (1) before Mon. Triades and the road to Pythagorion

Now you are very close to the tunnel, but the entrance is not visible from the house - and it is VERY difficult

to pass over to it.
6-   Continue about 200 meters, and after a very rough right turn and a little 'uphill' you have 2 'roads' to the right

and 1 to the left. Both tracks to the right lead to the entrance.
The first track (7) is very close to the last part of the underground aqueduct to the tunnel. 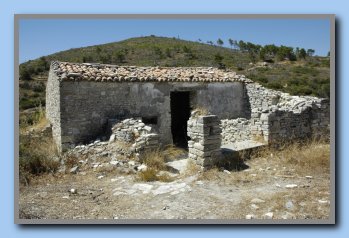 If you go by car (incl. a 4WD) then park BEFORE the ‘rough turn’, and do the rest by foot.
It is not possible to park or turn around by the tunnel.

At the end of the track: look to the left !!  Here you have the north entrance.
If you stopped 10 meters earlier, you could not see it !!

The entrance is blocked by a fence, but you can look down the staircase to the bottom.
We hope it will be possible to get the permission to visit the 'non public' part of the tunnel and make photos from that part also.

From the North-entrance it is possible to see to the 'spring area by the church. But very hard to localize the entrance from the 'spring-area'. 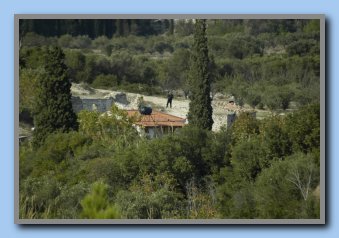 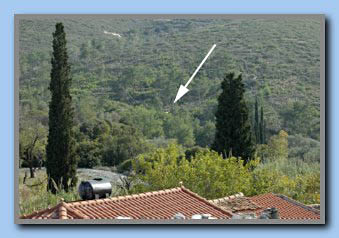 Jan by the house close to the church taking pictures of a little bright spot.
The church and the reservoir are 30-40 m. to the right of Jan.

The little spot was Torben by the tunnel entrance taking the picture of Jan... 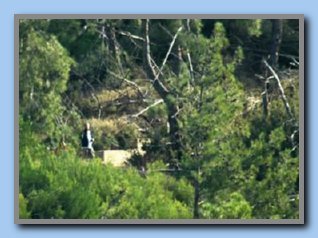 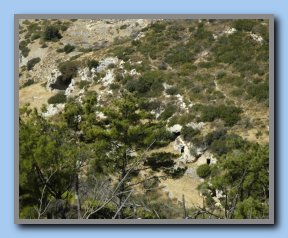 On the way back you can have a glimpse of the caves to the west on the other mountain.

We visited them. It was very interesting, and there is a exellent view of the whole area. 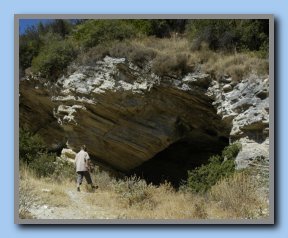 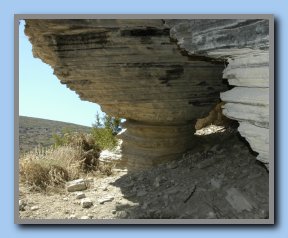 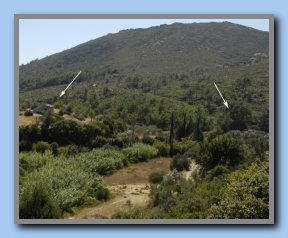 View from the caves.
The arrows point at the earlier mentioned old stone house and the position of the tunnel entrance.
The distance (house – tunnel) is only a few hundred meters.

Just after 'the rough turn' (20-25 meters) is something looking like an old well. Some believes that it is one of the many shafts down to the water duct, but now we are not quite sure. It is very close to the line of the duct and looks almost the same way as the shafts, but inside it is round (all other shafts are squared), and the water level is only 1 m. from the surface! 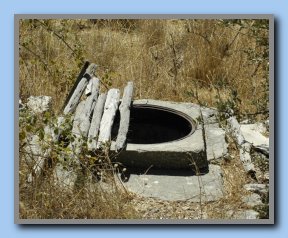 It has got a 'new' top as protection, so no animals or people could fall into it. But: It looks like someone could use the cover...

Follow the road, pass the 'road-T' and you will come to Agiades.

The spring and the start of the duct to the tunnel. 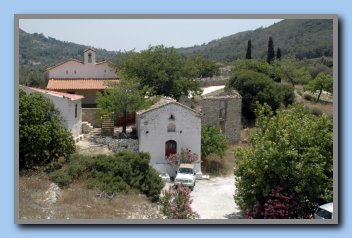 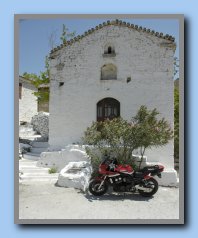 It all begins here under the old church in front of the new church. 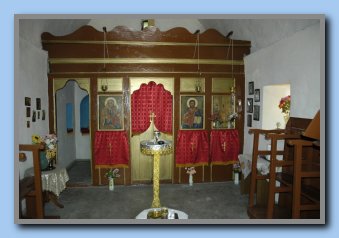 To us it was a little strange, that the spring, we often had been looking for, was right under this church floor.
The church was build on top of a big water reservoir a 'springhouse'.
The spring is located to the left of the church, and the water flows into the reservoir through 2 openings. The inner dimension is about 5 x 8 m., and the water level was about 60 cm. (now only 20 cm.).
The top of the springhouse is resting on 15 heavy columns each 0.5 m. in square.

The reservoir contained about 20 m3 of water.

From the reservoir it was possible to control the water flow in the aqueduct to the tunnel. 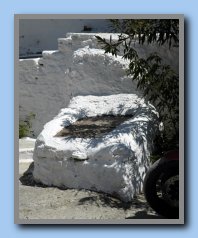 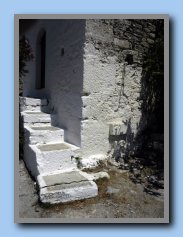 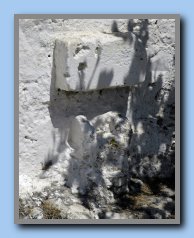 The only entry to the reservoir is in front of the church (now sealed), and on the corner the remains of an old outlet 'overflow' from the reservoir is visible.
One day, when we were searching for the spring and reservoir, we were sitting on the entrance to the springhouse talking about where it could be. One of us said: “I am sure, that it is closer than we think”.
We looked on our ‘bench’ and said: “Is it there?”   - It was!!

The spring is still in use, and 8-10 meters from the church is another and a newer reservoir with 2 pipelines leading water around the mountain down to the Pythagorion area. 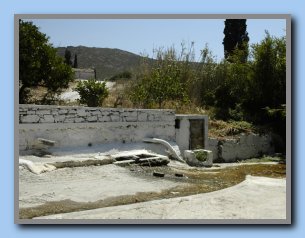 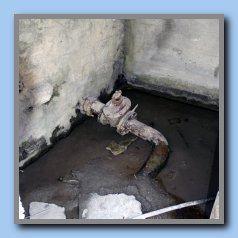 The new reservoir and one pipeline, and behind the door the other pipeline. 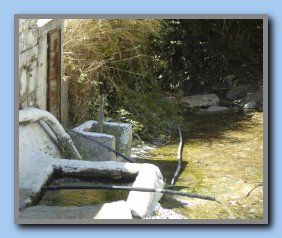 The water is constantly running, and many come here to get water for their animals and household.

The water quality is VERY good !!

Amazing that this spring supplied water for more than 1000 years to the ancient city Samos, and now again delivers water to the people in Pythagorion.

The new Church to the left, Mt. Kastro in the background and the arrow
point at the place, where people can get water from the spring.

The 830 m. long aqueduct is visible in many places. The first 600 m. it curves through the landscape, close to the 55 m. above sea level contour lines on the map. The last 200 m. it passes right through a big rocky hill directly to the tunnel. On the first part the bottom of the aqueduct is about 2-4 m. below ground level, and on the last part up to about 27 meters!
It is remarkable nice build with fine walls and a beautiful ceiling. Some places the ceiling is 'round arch' made of small stones and other places it is made of big stone plates tilted in 45°.

Based on our GPS readings we have made the below interactive map with information and photos concerning the aqueduct.

POINT at the numbered rings to get details.

CLICK at the numbered rings to get details + photos. 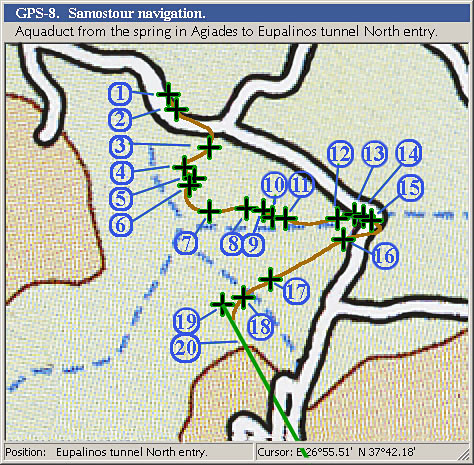 All the 'click-able' information is shown in normal text in the PDF-file. 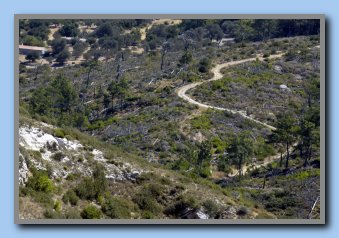 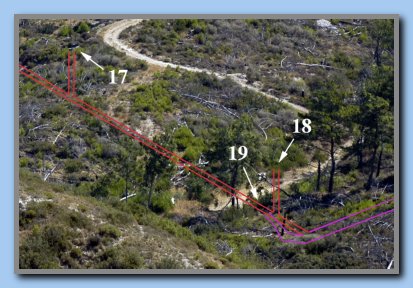 Same with "x-ray" sketch of the invisible underground shaft, duct and tunnel.
The numbers refer to the numbers on the map (Point or click on numbers).