News 1. August 2010: From the news in Greek radio - 4 local people are now arrested by the police and one of them has admitted that all 4 started the fire.

As soon as we get information this page will be updated.

The pictures 'talk' by them selves - so no text is made.

News at 05 PM: The fire is expanding - 5 'firebomber' airplanes & 6 helicopters are active. Airplane with (120?) firemen arrived from Athens.

All available local firemen and firetrucks are in use.

News 1100 PM: Everything in the mountain is RED!! New pictures added.

30 July at 03 PM: Due to a serious virus attack on our main computer it has not been possible to bring all the updates and pictures we wanted.

We have now been working on the problem for 21 hours and we hope to be back to normal to night.

News 05 PM: Hopefully the fire is now under control. 3 helicopters are still collecting water by Kokkari and disappear on the other side of the mountain.

The firemen still work to keep the fire down on the north side. We have heard, that the fire reached down to the area Mitilini - Hora - Koumaradei - Pyrgos.

GOOD News 31 July: Now we know for sure, that the fire has stopped in the Kokkari area.

But we still don't know anything about the damages. New picture of the 'fire-area' is added. 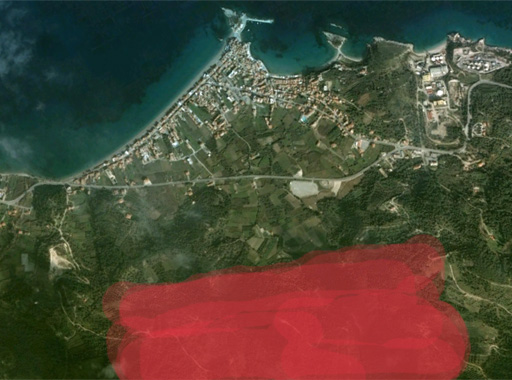 The area is marked on this picture from Google Map

30 July. Everything looks good now, and in the distance it is hard to see the damages.